by Lilly Jayne
from the Garden Squad mysteries by Julia Henry 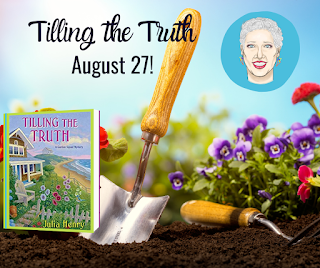 August is hot. H. O. T. Hot. Much as I love gardening, and I do love gardening, at this point in the summer I've started to wilt a bit. So have my flowers. Tomatoes and herbs are still coming in, but there's an end in sight. While I power through July, in August I tend to garden early in the morning or late in the afternoon. The rest of the time I sit on the porch reading, napping, and enjoying my beautiful gardens.

To till or not to till. Should I keep fighting that weed, or call it a draw for this season? Am I being disloyal to my impatiens if I start thinking about where to put the mums I've been nurturing? When do the bright colors of summer fade into the autumn hues, and when should I start encouraging the change?

As an avid gardener, I know enough to enjoy every single day with my gardens, and not to live for tomorrow. One windy storm or the dregs of a hurricane could throw my best laid plans asunder. It's happened before, especially this time of year.

Same's true for people, don't you think? I can't help but think of my dear friend Harmon Dane. Earlier this spring we were making fundraising plans for the bird sanctuary he's building. Now he's not here to follow through on those plans. Who would have expected him to pass so quickly, and so unexpectedly?  Maybe Harmon's death is part of the reason for my wilting this August. I do so miss my friend.

Delia's been doing her best to perk me up, but the only things that help me get through troubled times are gardening and fixing what I can. Time to do both.

Tilling the Truth, the second in my Garden Squad mystery series, will be released on August 27! Pruning the Dead, the first in the series, is on sale as an ebook this month, in case you want to start the series from the beginning! Both books are also available as audio books.

Readers, I will be randomly picking two commenters on this post and sending them a copy of the book. Comments will be open through August 23.