Dancing with the Ghosts of Pike Place Market

by Vinny Delgado, proprietor of The Wine Shop

from the Spice Shop Mysteries by Leslie Budewitz

You can tell me all day you don’t believe in ghosts. You can say “ghosts, schmosts.” You can demand “proof,” laughing because you think I’m some idiot who got whacked on the head one too many times or drink too much of my own product.

Ha. You name me a neighborhood in Seattle, I’ll tell you about the ghosts who live there. You come down here to the Pike Place Market after dark, I’ll make you a believer. 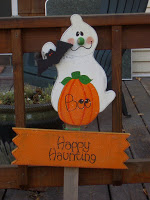 First, we’ll walk down the block here on Upper Post Alley to the Irish pub. It’s in a building that once held the city’s first mortuary. During the Klondike Gold Rush in the late nineteenth century, scads of men were robbed and left for dead along the waterfront — it wasn’t all clean and spiffy like it is now — and the funeral directors who picked up the bodies and disposed of them properly got paid a bounty from the city. Were those down-and-outers killed for the cash? You better believe it. Poor sods. But their spirits get the last laugh. For decades, they’ve rattled windows, broken plates, and drained the good whiskey at night, driving previous owners out of business. The current owners, they got smart. They leave a pitcher of beer and glasses out at closing, and make jokes whenever a glass flies off an untended table.

You remember the old bead shop on the lower level of the Market, what we call Down Under? It had a specter who liked to play tricks on the owners and mix up the beads at night. They called him Jacob. One day, while one of the owners was getting bad news on the phone – this is how I heard it anyway – a strand of beads went flying past her. Another day, a customer was trying to decide on a necklace and Jacob, he picked one she hadn’t even been looking at off a hook and dropped it on the counter right in front of her. And the stone in the center was the perfect match for her dress. Turns out that part of the Market once housed the orphaned boys who ran errands and held horses. I expect Jacob was one of them, who died young and chose to come back and spend the afterlife in a place where he’d been happy.

Then there’s Mr. Arthur Goodwin. Of a night, you can see “the Dapper Dancer” tapping past the windows in the upper floors of the Economy Market, still wearing the black suit and top hat he wore when he went to the dances in the ballroom that once occupied the space. 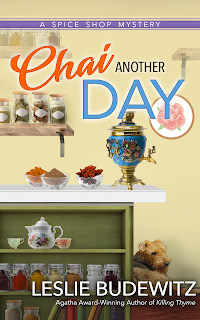 Seattle Spice Shop owner Pepper Reece probes murder while juggling a troubled employee, her mother's house hunt, and a fisherman who's set his hook for her.

As owner of the Spice Shop in Seattle's famed Pike Place Market, Pepper Reece is always on the go. Between conjuring up new spice blends and serving iced spice tea to customers looking to beat the summer heat, she finally takes a break for a massage. But the Zen moment is shattered when she overhears an argument in her friend Aimee's vintage home decor shop that ends in murder.

Wracked by guilt over her failure to intervene, Pepper investigates, only to discover a web of deadly connections that could ensnare a friend - and Pepper herself.

Leslie Budewitz is the author of the Food Lovers’ Village Mysteries and the Spice Shop Mysteries, and the winner of Agatha Awards in three categories. Death al Dente, the first Food Lovers' Village Mystery, won Best First Novel in 2013, following her 2011 win in Best Nonfiction. Her first historical short story, "All God's Sparrows," won the 2018 Agatha Award for Best Short Story; read it on her website. A past president of Sisters in Crime and a current board member of Mystery Writers of America, she lives in northwest Montana with her husband, a musician and doctor of natural medicine, and their cat, an avid bird-watcher.