By Janelle Washington from READ AND BURIED by Eva Gates

Not the history of my family actually, but my husband Neil’s.  Neil is a storyteller, and he loves nothing more than to tell our kids and their friends about the history of his family in these parts.  It’s an interesting history, sad and tragic on one hand, hopeful and happy on the other. Like most of us, I guess 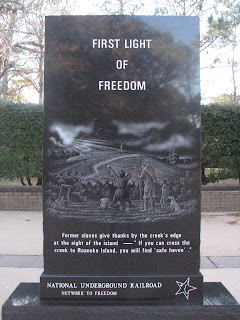 You see Neil’s ancestors were slaves. He can’t trace the family back any further than the Civil War, but his great-great-grandfather Thaddeus Washington was an escaped slave who became a leader of the Freedman’s Colony in Roanoke North Carolina.

If you don’t know much about the Freeman’s colony, I’ll let Lucy from the library tell you:

The [Freedman’s] colony had been established on Roanoke Island in 1863, at the height of the Civil War, to be a safe haven for slaves seeking refuge or those freed when the Union took control of Confederate areas. At first the colony thrived as the settlers built homes, worked their land and fished, established trades, and set up their own churches and schools. Some even joined the army or worked as spies, scouts, or guards for the Union. They were paid wages for their work and encouraged in their independence. Literacy spread and families stayed together.

The population grew and the colony soon became so crowded that infectious diseases began to take hold. Farming failed on the poor soil of the island; men were involuntarily conscripted for war work.

The colony struggled on.

When the war ended, President Johnson ordered all property seized by Union forces to be returned to its previous owners. That included the land at the Roanoke Island Freedman’s Colony. The families living there were told they had no rights to the land they’d been promised, on which they’d built homes, farms, workshops, and a community.

The settlers dispersed and the colony was abandoned in 1867. A few years later, only a handful of the freedmen remained on the island.
Read and Buried by Eva Gates 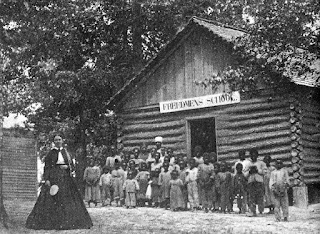 My husband Neil comes from one such family. Unlike most, the Washingtons stayed in these parts and many (like Neil and our children) are still here today.

Seems like a story from long ago, but Lucy’s discovered something in those old documents they found buried at the bottom of the lighthouse. Something that might well correct an injustice done long ago to the heirs of Thaddeus Washington.

Read and Buried is the sixth in the Lighthouse Libray series by Eva Gates, published by Crooked Lane Books. Eva is a pen name of Canadian author Vicki Delany. 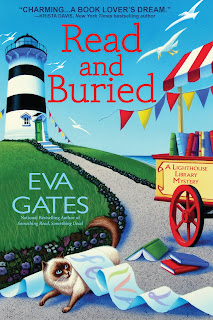