by Lilly Jayne
of Garden Squad series by Julia Henry 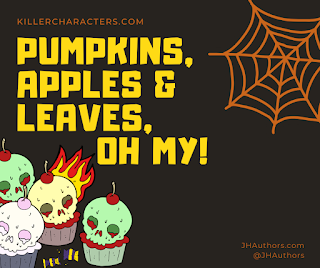 There is a plot of land next to the elementary school. We'd like to make it a garden plot, but some short sighted folks in town don't see it. So, I thought I'd help them with their vision.

A few of us pitched in to help some students grow a pumpkin patch. Now, I've already mentioned that I don't grow pumpkins. I did do some research, but then, well, it just got out of hand. The children each wanted to plant their own seeds. I thought, I really did, that most of the plants wouldn't take. What I didn't take into account was the effect my growing mix combined with the fresh soil would have. And that each plant would produce so many pumpkins.

The children are thrilled. The miniature pumpkins are being used in art class, and being sent home. But still, there are a lot of pumpkins. Several of which are adorning my front porch, waiting for a carving party that Delia is arranging.

Speaking of which, we've also been overly blessed with apples. Delia went on an apple picking trip with the Girl Scouts. Suffice it to say, she got a bit overenthusiastic. She insists that applesauce, pies, and canning are in our future. But for now, there are bags on apples on my back porch, which is doubling as cold storage this time of year.

Then there's the leaves. The town called for leaves to be dropped off at the dump as part of their composting/mulching project. The mulched leaves are good plant cover over the winter, but the window is short to turn it all around. Well, the n'oreaster helped bare the trees a bit faster, so there was a rush at the dump. Folks coming to drop off and pick up. Course, after what happened at the dump this summer, I was thrilled that folks were willing to come out. But still.

My week has been all about pumpkins, apples and leaves. Oh my. I need a rest.


Julia Henry writes the Garden Squad mysteries. Pruning the Dead was the debut of the series. Tilling the Truth was released in August. JHAuthors.com  Follow Julia on Instagram and on Facebook as well.
Submitted by J.A. Hennrikus