A Visit to London in the Winter


For many people winter isn’t the best time of the year to visit London, but when I go there I like to do it in December or January. Mainly because the tourist crowds aren’t out in force.

It helps of course, that that’s the only time I can go. I own and manage the Sherlock Homes Bookshop and Emporium in West London Massachusetts. West London is on Cape Cod and that means summer tourist season.  It’s hard enough finding time to take an afternoon off, never mind go on vacation. My best friend, Jayne Wilson, runs Mrs. Hudson’s Tea Room, next door at 220 Baker Street, and she gets even less of a break than I do.


When the opportunity to go to the Sherlock Holmes in the Modern Wold Convention in London in January came up, the timing was right. I could leave the shop in the (dare I hope) capable hands of my great uncle Arthur Doyle and my assistant Ashleigh. What’s a vacation without friends, so I managed to talk Jayne and Ryan Ashburton into coming with me. Sherlockian-extraordinaire Donald Morris and rare book dealer Grant Thompson were happy to tag along.

As well as conference things, I plan to spend time visiting my parents Henry and Anne Doyle and maybe even see my older sister Pippa. I’m not entirely sure what Pippa does for a living. She says she’s a ‘minor functionary’ in the British government. I suspect she’s a lot more than that, but I’m not going to ask.

Anyway, we’re off for a few days of fun in the world’s greatest city. I can only hope nothing will happen to spoil our vacation. 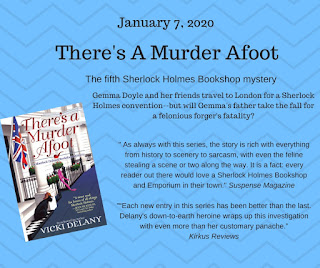 There’s a Murder Afoot is the fifth Sherlock Holmes bookshop mystery by Vicki Delany. It will be released on January 7 by Crooked Lane Books. For Seasons Readings, Vicki has an advance review copy (ARC) for one lucky reader. Please leave a comment below to enter. For Gemma Doyle, London is The World’s Greatest City. What’s your idea of the best city to visit?