Christmas in New York City in the 1930s #BookGiveaway #SeasonsReading

The holiday season is a wonderful time to be in New York City.  It starts with a bang with the Macy’s Thanksgiving Day Parade.  The whole family went to see it one year—it was terribly cold but we all bundled up and afterwards we had hot chocolate at Schrafft’s.  My sister Rose, who was only three years old at the time, squealed with delight when the first balloon came into view.

Then there’s ice skating at Rockefeller Center and the lighting of the enormous Christmas tree, which sparkles with hundreds and hundreds of lights.  Sadly, it rained last year but we managed to take shelter under the canopy of Saks Fifth Avenue across the street.

Of course, there’s plenty of shopping to be done, but I also make time to window shop and admire all the wonderful Christmas displays like the animated display in the large Fifth Avenue windows of Lord & Taylor.  They are quite spectacular!

Of course there’s Christmas Day itself when we open all the presents that have been under the tree teasing us for days!  Mrs. Murphy roasts a goose and we have celery stuffed with pimento cheese to start followed by soup, the goose and all the trimmings and slices of fruitcake for dessert.

Then it’s time to ring in the New Year with a glass of champagne and a trip to Times Square to watch the ball drop.  Do you know they’ve been doing that since 1907?

I’m always a bit sad when the season comes to an end but I know we have spring to look forward to in a few short months.

What are some of your favorite holiday memories?

I am giving away one e-book of Murder, She Encountered, which will be out on December 3! 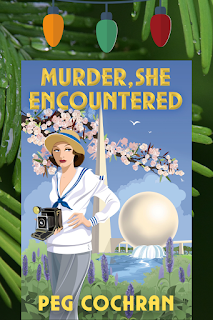 New York City, 1939. A rising star at the Daily Trumpet, Elizabeth “Biz” Adams has been sent to the World’s Fair—billed as the “World of Tomorrow,” a look toward a brighter future even as the drumbeats of war grow louder—to cover a robbery. What she stumbles upon instead is a dead woman, dumped into the Aquacade’s pool with a nylon stocking wrapped around her neck.

Elizabeth snaps a photo as the police arrest Joey Dorman, a gentle young hot dog vendor who made no secret of his obsession with the murder victim. Even though she’s thrilled that her photo makes the front page, the fear and confusion evident on Joey’s face are haunting. So Elizabeth vows to prove his innocence—or his guilt—with her partner at the Daily Trumpet, Ralph Kaminsky. Meanwhile, her romance with Detective Sal Marino is heating up, and Elizabeth is more determined than ever to follow her heart.

But when Kaminsky’s efforts to expose the real killer land him in the hospital, Elizabeth is forced to continue the investigation on her own. And as she tries to narrow down the long list of suspects, she discovers a dark secret running through the Fair—a secret some would kill to protect.