by Delia Greenway
from the Garden Squad series by Julia Henry 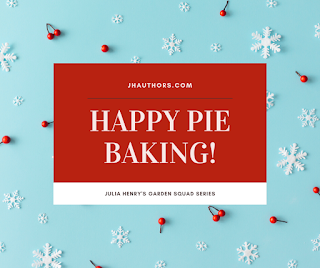 You know, I love to bake. I really do.

I get a bit obsessed with baking, and making everyone happy.

When Lilly wanted to host Thanksgiving desserts, I thought it was a great idea. It was the first big holiday event she wanted to host since her husband, Alan, had died.

It wasn't the full dinner, which was too much. For both of us. instead, Lilly decided to host a dessert party at her house starting at 7. Since we were going to Tamara and Warwick's house for dinner at 2, that would give us plenty of time to get back to the house and get things ready.

And it wasn't like there wasn't going to be help. Ernie and Roddy were in charge of beverages, and had the coffee urns ready to go, tea caddy stocked, wine refrigerator full, and mulled cider spiced.

Tamara and Warwick were bringing cookies and chocolate. Most of them were from Warwick's team sales this past fall. Whenever the team needed to sell more cookies or candy, the O'Connor's stepped up.

I'd volunteered to make the pies. I liked making pies. How hard would that be?

Then I asked a couple of people what their favorite pie was. No one had the same answer.

How could I choose? Who would I disappoint?

Well, I decided to make mini-pies and make everyone happy.

I gave myself a week, and made 60 pies. A bit overboard, perhaps. But I wanted everyone to be happy. And to have leftovers to bring home. Lilly likes to have pie for breakfast, so I know they won't go to waste.

The pies were a huge hit. Tonight Lilly asked what I thought about hosting a dessert party around Christmas. And using the Garden Party invite list. That's over one-hundred people. Yikes.

I figure if I start now, I can make enough pies for the party. I hope 144 will be enough. I'm adding blueberry, buttermilk, banana cream, custard, and peach to the list. Have any other suggestions? Keep them to yourself, please. A dozen of a dozen will make this holiday season a happy one.

******************
Pruning the Dead debuted this past January, and Tilling the Truth came out in August.
Friends, as you know, Julia Henry writes the Garden Squad mystery series.

As part of our Season's Readings Celebration, I'm going to give away two copies of Pruning the Dead to commenters who answer this question.

What is your favorite type of pie?

Comments will be open through Saturday, November 23.
Submitted by J.A. Hennrikus