Winter’s on its way! Time to bundle up and get into a really good book, and to help you chose, here are our new cozy releases for November 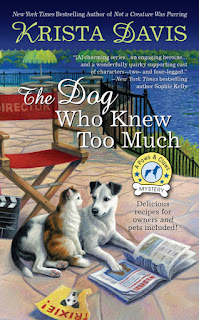 When a famous pooch comes to Wagtail for some downtime, inn owner Holly Miller learns that murder never rests in this all-new Paws & Claws mystery in the New York Times bestselling series.

America's favorite dog comes to pet-friendly Wagtail for some rest and relaxation, but Holly quickly discovers that this perfect pup is a total scamp who takes every opportunity to run off and misbehave. During an outdoor treasure-hunting game, the star dog and Trixie, Holly's beloved Jack Russell terrier, stumble across a dead body.

Holly has more than murder to worry about, though, when a man shows up after reading an article featuring Trixie in a magazine and claims that he is the dog's rightful owner. Holly will need to prove that she is her pup's only parent and catch a killer to restore peace to her pet-loving happy place. 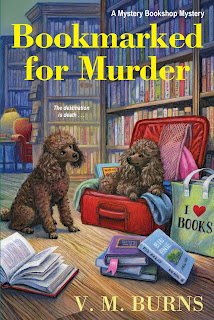 Amateur sleuth Samantha Washington’s shopping trip to Chicago takes a deadly detour when a man is murdered on her bus . . .

After some post-Christmas retail therapy in the Windy City, mystery bookshop owner and historical whodunit novelist Sam Washington is returning home to North Harbor, Michigan, on a chartered bus. With Nana Jo and her gal pals Irma, Dorothy, and Ruby Mae from Shady Acres Retirement Village along for the ride, it's a lively trip. But one passenger is not so lively—a gentleman Irma befriended is found dead in his seat after an unscheduled stop. The ladies immediately shift gears to find out who punched his ticket, while Sam slips into the driver's seat to make sure Nana Jo and her crew steer clear of fatal conclusions . . . 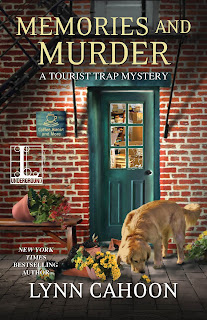 It’s October in South Cove, California, and the locals in the quaint resort seem to be happily pairing off in the lull before the holidays. Everyone, that is, except for Jill Gardner’s elderly aunt, who just dumped her besotted fiancé—and she won’t say why.

When Jill hosts a talk at Coffee, Books, and More on the topic of elder abuse, all that’s really on her mind is lunch. But the topic hits close to home when she discovers Aunt Jackie has been getting mysterious calls. Jill’s certain the caller is a con artist, of course, but her feisty aunt claims to understand this, though she’s still shaken—and Harrold’s still heartbroken. Who’s behind the scam and why was her aunt targeted? When a volunteer from the Senior Project is found murdered, Jill’s detective boyfriend is on the case—and it soon becomes clear no one is safe when a caller from beyond becomes a killer in their midst. 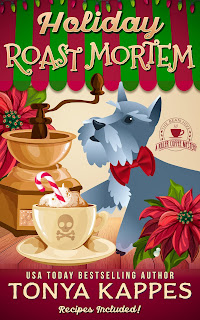 Christmas is right around the corner.

Fresh off the Christmas Pawrade and Central Park tree lightning, Honey Springs is buzzing with the excitement of the season.

Roxy Bloom and Patrick Cane are hosting the ultimate Christmas Day Diner for all of their friends and family at The Bean Hive. Roxy has been so busy with her Jingle Bells Lattes and planning the party that Patrick whisks her off for a romantic dinner at the Watershed for some alone time.

Their dinner turns out to be a headache. They were seated next to Ryan and Yvonne Moore, who fought the entire time.

After dinner, Roxy and Patrick see the couple drive off the road into Lake Honey Springs, Patrick dives into the frigid lake to save the couple only to find Ryan was already dead.

After a preliminary autopsy, Ryan Moore’s death was not an accident, leaving Yvonne Moore the number one suspect.

When Yvonne asks Roxy Bloom to help her figure out who killed her husband, Roxy jumps at the chance to put her Jingle Bell Lattes and holiday planning aside to help out a friend.

One problem, Roxy starts to wonder if Yvonne is really the killer and using Roxy to get away with murder after Kirk, Roxy’s ex-husband and defending lawyer for the deceased Ryan Moore, lets her know a big secret that would change the entire investigation. 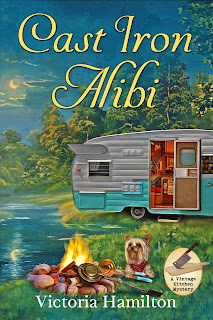 In the new Vintage Kitchen Mystery from the author of Breaking the Mould, when an over-amorous handyman is found murdered, Jaymie will have to use every tool at her disposal to nab the culprit . . .

“I have loved this series from the first book . . . it’s like returning to a favorite nook for a cup of tea. It will delight, entice, and drive a reader to want to solve the murder.” —Goodreads on No Grater Danger

Looking forward to her girls-only college reunion vacation, Jaymie’s on cloud nine at the idea of lazy trips to the beach, dinner cruises on the nearby river, and snug sleeping in the vintage trailer she’s renovated. But no sooner does the group reconnect than her hopes turn to tension as petty squabbles and old acrimonies surface, along with tagalong friends, unexpected guests, and stalkerish ex-husbands. And when a local toolbelt Romeo with an eye for one of the women is found murdered, his home ablaze, the simmering hostility in the group suddenly shifts to secrecy.

Local law enforcement is zeroing in on the victim’s best friend and girlfriend as the most likely suspects, but Jaymie’s inquisitive instincts are telling her one of her former classmates may have been involved in the foul deed. Forced to navigate her fraught relationship with a local police detective and determined to uncover the myriad secrets her college friends are hiding, Jaymie knows she’ll have to dig deep to figure out whose alibi is cast iron, and whose is flimsy as tin . . .