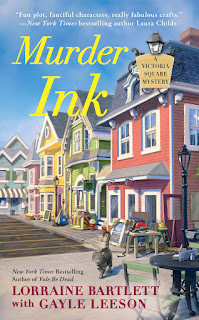 by Katie Bonner of Murder Ink, by Lorraine Bartlett and Gayle Leeson

Even though it's Christmas now, my mind keeps returning to an incident that happened a few months ago.

You see, we were having a Victoria Square Merchants Association meeting when newcomer Paul Fenton announced he was buying one of the vacant buildings on the Square and opening his tattoo studio there. There were quite a few merchants who weren't in favor of a tattoo parlor becoming part of their quaint square--they thought Paul's business wouldn't project the proper vibe. In fact, after Paul stormed out of our meeting, we took a vote to buy the building ourselves.

I was busy with the hiring of a new chef for Tealicious, my recently-acquired tea shop. But when it was determined that several of the merchants were planning to make an offer on the vacant building, I decided to join in. I can always use some extra income, and it appeared to me that a rental property with several merchants sharing the responsibility was a good investment.

When I went to speak with Paul Fenton's brother, Ken--who was renovating the building for its current owner--the man got electrocuted with his own circular saw! If you'd like to read more about this latest Victoria Square adventure, please pre-order the book here or find out more at the authors' websites (links above).

Since Murder Ink won't be released until December 30 (the something new from the title of this post), I'll be giving away a copy of Better Off Thread, an embroidery mystery, and an adorable snowman cross-stitch kit! To enter the giveaway, please leave a comment below telling me what book(s) you're looking forward to reading in the coming year. Don't forget to include your email, so I can let you know if you win! Giveaway will run through Thursday, December 14, 2019. Good luck! 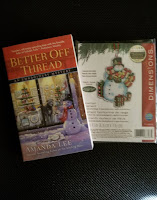