February is too long to begin with, at least in my opinion.

Don’t get me wrong. It’s prime season for florists. It’s like tax time for accountants and Christmas season for toyshops. It’s where we break even after the lean month of January. (Who orders flowers in January?)

And maybe it’s just the long hours that make me a little cranky. For several days leading up to the holiday, it’s all hands on deck and we’re practically living in the shop.

I don’t mind, so much, the well thought-out orders. Like the man who always came in early to order his wife a lovely arrangement featuring violets because they were her favorite flower. I always make sure I put in a few blue violets along with the others, to express the devotion this man feels for his wife.

It’s the last-minute, deer-in-the-headlights men, who dash in on their way home from work. Liv had all that planned for, though, with a huge display of ready-made bundles of roses and baby’s breath heaped up by the register. They plunk down their cash and are on their way. No muss, no fuss. They’ve fulfilled an obligation. I guess the recipient is thankful.

The worst, though, is the men who come in the day after.  It’s going to take more than a handful of roses to make their homes happy again.

What does one buy a florist for Valentine’s Day? Well, the most thoughtful gift I’ve gotten might have been a cupcake bouquet, a dozen cupcakes each with an elaborate buttercream frosting flower (Not fondant, ick.) on top, each picked for their meaning in the language of flowers.

Question: What is the most thoughtful Valentine’s gift you’ve received? 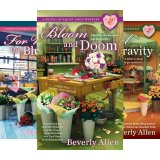