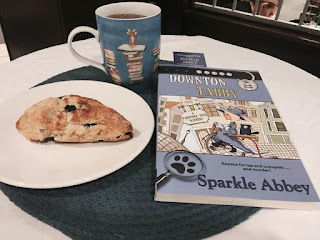 Hey everybody! It’s me, Betty Foxx—feisty assistant and P.I. in training! That’s right, it won’t be long and I’ll be a licensed private investigator. My friends and family are playing it cool, but I know they're as excited about my new crime-solving career as I am.

Anyway, after I had finished my morning coffee at the Koffee Klatch, I offered to stop by today since book seven, Downton Tabby is on sale for .99 on all eBook platforms. It was during this case when the sleuthing bug bit hard, so I thought it was only fair that I got to spread the news about the sale.
See, I helped Carol (you know her as Caro Lamont) and Detective Hottie catch a killer. I can’t spill all the details, but I can tell you I was amazing! I employed great sleuthing skills—including my own version of surveillance. Take it from me; people pay no attention to little old ladies hiding in the shrubbery.

It all started when Carol tripped over a dead body, missing our first official pet behavior appointment for my Saint Bernard, Raider. Well, I could tell by the way she didn’t want to get involved in solving the murder that I would have to be the one to help the police. Don’t know why she wanted to keep her nose out of it since it was her business associate who’d bit the dust.

Carol assured me the police would handle it, but it wasn’t long before I caught that sneaky news reporter, Callum MacAvoy, trying to squeeze information from the poor girl. Of course, I stepped in to rescue her. Well, that must have been the nudge Carol needed, she was collecting suspects and throwing them under the bus to Detective Hottie.

You can read how it ended for yourself. I have to get back to my newest case, the Laguna Bash ‘n Dash break-ins. For now, no one has been hurt, but in my experience, it won’t be long for someone ends up dead. 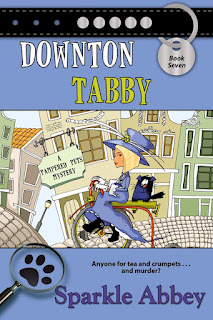 Don’t forget, Downton Tabby and is on sale for .99 in all ebook formats until February 15th