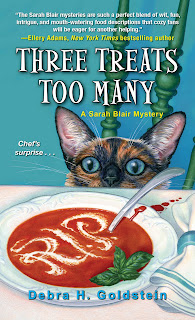 the star of the Sarah Blair mystery series


Sometimes, I worry about my human, Sarah Blair. If it wasn’t for me, I’m not sure how she’d know what clothes to wear on a date or that a hug or snuggle can make the blues disappear in a matter of moment (of course, if she cries, she gets my fur wet and then I have to clean myself to avoid matting). Lately, I’ve been trying to make her understand the importance for authors to have pre-orders if characters and series are going to continue.


Because Kensington originally bought three Sarah Blair books and then, because of me (after all I am on the cover of each of the books, not Sarah), they’ve contracted for two more. That means there will be at least five books in the series, but like a cat has nine lives, …. You get the picture. That’s why I’ve been nudging her to share the new cover, that was revealed two weeks ago on Dru’s Musings (Dru is on my favorites list) and tell you that even though you can’t read Three Treats Too Many until August 25, it already is available for pre-order.


Sarah keeps ignoring me. Doesn’t she realize playing with Fluffy isn’t in her best interest? Personally I could have done without her becoming a member of our household. It’s not that I don’t like Fluffy, I do. She had a tough life and even though she’s a dog, she understands I’m the alpha male in this household, but sometimes business must come before play.  So, I’m going to share the cover and links for Three Treats Too Many with you. Maybe by next month, Sarah will stop playing with Fluffy and write something about all of us for our Killer Characters column!

In the meantime, want to get to know me? Leave a comment telling me why you like books with animals and one of you will win a copy of One Taste Too Many (print - USA - only)
Submitted by Debra H. Goldstein