In the Mystery Bookshop Mystery Series by V. M. Burns, Samantha Washington has two adorable toy poodles, Snickers and Oreo. Even if you haven’t read any of the books, chances are you’ve seen them on the covers. If you’re curious, here’s a bit more information. 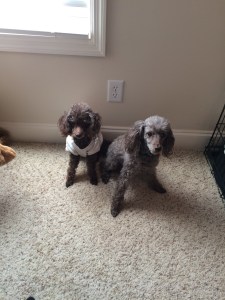 Snickers and Oreo are two chocolate toy poodles. The author, V.M. Burns based them on her own dogs, Coco and Cash. Snickers (Coco) is a female and the older of the two dogs. She’s also the brains of the operation and if there is mischief in the works, you can bet that Snickers thought it up. Snickers is inquisitive, stubborn and strong-willed. She has a mind of her own and believes that humans exist for the sole purpose of scratching her belly (what else are hands good for). She loves cheese and tolerates her brother. Honestly, she really wasn’t sure we needed him. A couple of times, she even tried to lead him astray. However, it didn’t take long for her to realize that he wasn’t the brightest member of the pack. We’d better keep him around or who knows what would happen to him.

Oreo (Cash) is a couple of years younger than Snickers. He’s bold and has a zest for life that is infectious. He isn’t afraid to boldly go where others fear to tread, regardless of whether that is into snow drifts that are taller than he is or weeds with burs that must be pried from his coat. He is a bit gullible and will fall for any scheme Snickers comes up with, including playing lookout while Snickers rummages through grocery bags while Sam is pumping gas. Oreo isn’t into cuddling, but he is a lover (in his own way) and will follow Snickers and Sam through hell or high water.

V. M. Burns was ecstatic when her publisher decided to feature her poodles on the covers of her books. She was even more excited when she saw the illustrator’s designs. She captured both dogs’ personalities perfectly. If you’re curious which dog is which, Check out the cover of the latest book in the series,  BOOKMARKEDFOR MURDER.  Snickers is the one planning how to pack herself into the suitcase while Oreo looks on.

Amateur sleuth Samantha Washington's shopping trip to Chicago takes a deadly detour when a man is murdered on her bus. . .

After some post-Christmas retail therapy in the Windy City, mystery bookshop owner and historical whodunit novelist Sam Washington is returning home to North Harbor, Michigan on a chartered bus. With Nana Jo and her gal pals Irma, Dorothy and Ruby Mae from Shady Acres Retirement Village along for the ride. It's a lively trip. But one passenger is not so lively-a gentleman Irma befriends is found dead in his seat after an unscheduled stop. The ladies immediately shift gears to find out who punched his ticket, while Sam slips into the driver's seat to make sure Nana Jo and her crew steer clear of fatal conclusions. . .