Southern Roots and a #Giveaway package 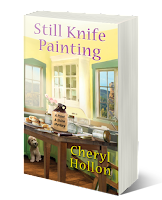 Hello. I'm Miranda Trent, owner of Paint & Shine. My brand new business specializes in adventure tours set the Daniel Boone National Forest in eastern Kentucky. My clients paint a picture and then sample a traditional southern meal paired with moonshine. I've been back in Kentucky for a few months now and the business is kicking off pretty soon, now.

Do you speak two languages? I do. One for my friends up in New York City where I nearly starved to death as an artist, and one language here at the family farmhouse in Wolfe County, Kentucky. 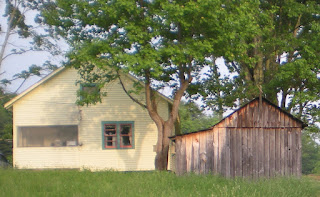 It is not as weird as you think. You see, my mom and dad were both born in Kentucky, but they moved up to Dayton, Ohio, right after I was born. So, I grew up with a plain Midwestern speech pattern. Pretty much broadcast radio with a flat accent and cheerful tone.

But my summers were spent in my mother's childhood farmhouse with my grandparents at first, then when they passed, with my mother's brother, my Uncle Gene. I loved those summers in the fresh, wild, pastoral, lazy, time of no time Kentucky highlands. When I was there, I learned a slow, drawl that used entirely different words.

I didn't see the issue until I went to New York and heard a million different versions of American English. I chose to stick to my Midwestern ways, but I revert to a drawl as soon as I step foot in the farmhouse.

Do you or do you know someone who speaks with more than one accent?

There's a Paint & Shine series inspired #GIVEAWAY! You'll be entering for a chance at this package. It contains a Kensington swag bag along with four paper coasters, two pads of sticky notes, a signed copy of DOWN IN FLAMES (Webb's Glass Shop Book #6), as well as two paint palette lollipops. Good Luck! 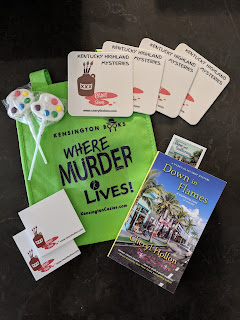 Leave a comment and your email address in the form of  yourname (at) yourserver (dot) com to foil the SPAM bots. Do this by midnight on the 26th for the chance to win all pictured plus a signed copy of Down in Flames. This giveaway is limited to U.S. and Canadian residents. Just a reminder, comments received after midnight on the 24th will go into a moderator's queue. I'll approve them before I make a random selection. Winner will be notified within 48 hours.


Still Knife Painting will release on June 30, 2020. It is available for your pre-order at Amazon, Nook, Kobo, Indiebound, and also in your favorite independent book store. It is published by Kensington Books.  If your budget is tight, please ask your library to order.

Miranda Trent has set up a sweet life in a scenic corner of Appalachia--until she stumbles across the trail of a killer . . .

After inheriting her uncle's Red River Gorge homestead in Eastern Kentucky--smack dab in the middle of the Daniel Boone National Forest--Miranda comes up with a perfect business plan for summer tourists, pairing outdoor painting classes with sips of local moonshine, followed by a mouthwatering sampler of the best in southern cooking.

To Miranda's delight, Paint & Shine is a total success--until someone kills the cook. As the town's outsider, suspicion naturally falls on Miranda. Murdering the best biscuit baker of Red River Gorge is a high crime in these parts. Miranda will have to prove her innocence before she's moved from farmhouse to jail cell faster than she can say "white lighting" ...


Naturally, my Webb's Glass Shop Mysteries are still available with more to come!

Fulfilling the dream of a lifetime, she combines writing with a passion for creating glass art. Cheryl and her husband, George, live in downtown St. Petersburg visiting museums, walking the parks, and sampling the adult beverages.