by Yolanda Bella, Tally Holt’s best friend and owner of Bella’s Baskets
from the DEADLY SWEET TOOTH #2 in the Vintage Sweets series by Kaye George 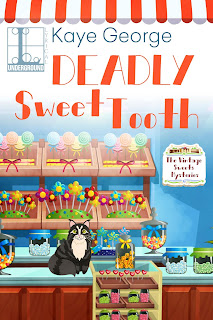 I don’t envy my friend Tally right now. Okay, I am envious of her most of the time. Her parents, for example. They don’t meddle in her life like mine do, especially my father. Always treating me like I’m some delicate little flower that can’t manage on my own. Just because I didn’t go into the real estate business with him like my sister, Violetta, that paragon of daughterly perfection. No, Tally’s parents are usually on the other side of the world, letting her live her own life. And she doesn’t have a sister to be unfavorably compared to.

Right now, though, I wouldn’t want to be her. She’s short-handed at her shop. And those globe-trotting parents? They’re making a rare appearance here, in Fredericksburg, Texas. Tally is holding a reception for them and has to hire some help for it—at the very last minute.

Also, Allen, the guy she was beginning to really like, has taken a job that will keep him out of town most of the time. Poor Tally.

The party is about to begin and Tally’s parents have shown up. But what is wrong with her mother? She looks sick, feverish. I think she might faint. And those servers Tally hired, they keep disappearing. And now what’s happened? One of the guests has fallen to the floor. No, not Tally’s mother. It’s Fran Abraham. She doesn’t look well at all. Someone call an ambulance!

This is very bad. But there IS something good happening—for you!

The publisher, Lyrical Press, is running a Goodreads giveaway of DEADLY SWEET TOOTH, giving away 100 copies of the e-book! 100 winners! Hurry over to sign up:
https://www.goodreads.com/giveaway/show/305807-deadly-sweet-tooth

You can also buy the first book, REVENGE IS SWEET, at
https://www.amazon.com/Revenge-Sweet-Vintage-Sweets-Mysteries-ebook/dp/B07TS1KJ4T/