by Lilly Jayne, from the Garden Squad mysteries by Julia Henry 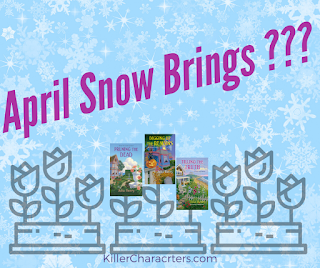 It's mid-April here in Massachusetts. Well, I suppose it's mid-April everywhere. Forgive me, I'm a bit distracted these days. The world's a bit upside down, as you know. Mind you, I don't mind hunkering down at home. Especially this time of year, when I'm spending time with my seedlings in the greenhouse and tending to the gardens anyway.

You know the old saying, "April showers bring May flowers?" I always loved saying that. Because it's true. Rain is necessary for this time of year. Also, it helps give solace to dreary days. May flowers are worth my aching joints and staying inside.

But what, may I ask you, is April snow supposed to bring? Now, I know that some of you are used to snow this time of year. Here in New England we're used to long winters. But snow? In my part of Massachusetts, the south shore, mid-April snow just doesn't happen.

Well, it just doesn't happen normally. This weekend I woke up on Saturday morning to a blanket of the white stuff with more coming down. Yes, of course, it didn't last long. But still. I've got to say, I did not enjoy another display of the fickle power of Mother Nature. And who knows what these yo-yo weather events are going to do to the blooming season.

I'll be less cranky next month, I promise. But snow in April? Can you blame me?

I hope that you are all safe and taking care, my friends. See you next month when we'll all know what May brings. Or at least we'll have a better idea.


Julia Henry writes the Garden Squad mystery series. The first took books in the series, Pruning the Dead and Tilling the Truth, are both on sale for $1.99 as e-books through most major outlets right now. Digging Up the Remains will be released in August, and is available for pre-order.
Submitted by J.A. Hennrikus