Lazy, and proud of it! 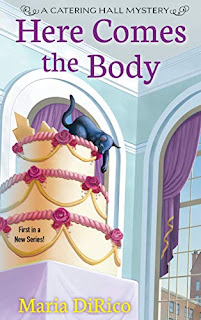 I'm one of Mia Carina's co-workers at Belle View Banquet Manor, although I like to use the term 'work" loosely - as loosely as possible. The Carinas are neighbors from around the corner of our little slice of two-family-home heaven in Astoria, Queens. When Mia's father Ravello took over the catering place, I agreed to help him out, with the proviso that I'd basically do as little as possible once Mia got back. Bless those Carinas, they stuck to this deal, giving me plenty of time to make my ex, detective Pete Dianopolis, pay for divorcing me when he thought he'd become a bigshot mystery author under the name, Steve Stianopolis. Clever, huh? He wants me back now that he's realized that ain't gonna happen, but I've made him rachet up the wooing. This means I'm spending a lotta time getting facials and manicures and learning to be a Zumba instructor, all on his dime.

I also need to spend plenty of time maintaining my appearance, the better to make him wish he'd never walked out on me, the bum. This requires some effort, since my look is mid-1980s. No joke. I even get my lavender eye shadow from a website specializing in discontinued makeup. You want an idea of my role model? Check out 1980s Debra Harry.

I gotta go. I put in a good half-hour of work at Belle View and I need to reward myself with a new pair of earrings - on Pete's credit card. Later, people!

Readers, is there a look or product from past decades that you've stuck with ever since?