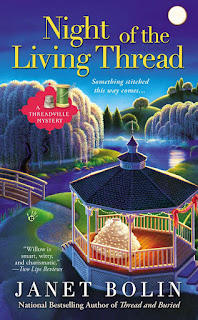 by Edna Battersby from the Threadville Mysteries by Janet Bolin

I own Buttons and Bows in Threadville, Pennsylvania, a village boasting many needlecraft shops. I sell every kind of button, trim, and bead you'd ever want. I'm particularly fond of notions that sparkle and shine...

You know how we tend to carry everything we think we might need in handbags, purses, tote bags and backpacks?

Victorian women had a different method of carrying their necessities of life. And here's what I love about them: they also served as jewelry. The fashion might have begun as watches hanging form chains which were called "equipages."

They hung them from their waistbands. Typically, several chains would be attached to a medallion. The chains would hold everything from button hooks to cases with small scissors to tiny notebooks to perfume ampoules. Or vinaigrette. You know, in case of swooning, which seems to have been a popular occurrence with Victorian women, perhaps partly due to the tightness of those waistbands . . .

The chatelaines were often crafted by fine jewelers and could be quite lovely with jewels and precious metals. They jingled.

Some of the chatelaines were made with less precious, heavier metals. They clanked.

I would love to go back in time and see and hear these women and their chatelaines . ..

I mentioned the scissors cases. Many of the chatelaines were specifically for needlework. In addition to the scissors, they held thimbles and needle cases. And probably bottle of vinaigrette. All of these things, possibly including the vinaigrette, would make them almost perfect for the many women who come to Threadville to buy needlecraft supplies, attend the classes we give, and generally have a great time with each other.

You can read more about chatelaines and admire pictures of them here.

In NIGHT OF THE LIVING THREAD, a bling-encrusted wedding "skirt" that Edna's friends made to tease her became a murder weapon . . . .

Do you think chatelaines could be a fun fashion accessory for today? Let us know in the comments!