In Praise of Sour **And A Giveaway**

by Lilly Jayne
from the Garden Squad mysteries by Julia Henry 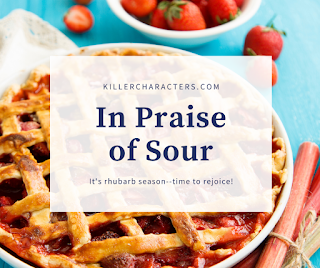 It's coming upon rhubarb season, and I for one couldn't be more pleased. I love that wonderfully tart vegetable, and it's complexity. The leaves are large and beautiful. And toxic. Only the stalk is edible. But not edible without some work.

The stalks look like pink celery, but it doesn't taste like it. I can remember watching my mother chop and up when I was a little girl, and begging her for a bite. She gave it to me, and wow. I tried my best not to wince as I chewed, but I didn't make it. Imagine my surprise that night at dinner when she presented a pie made out of the sour stalk. I winced as I took a small bite, and remember squealing in delight. It was wonderful. The next week she made a strawberry rhubarb pie that was as delightful, if not more so. Especially with in season strawberries.

As it turns out, sour is very versatile. Levels of sweetness can be added or adjusted, which means that the vegetable is a wonderful basis for a syrup (2 cups of sugar, one pound of chopped rhubarb, 1 cup of water, a dash of nutmeg and cinnamon, boiled and strained. Keep the rhubarb, it's a lovely topping). The syrup is delightful in soda water, in cocktails, or even over ice cream.

Roast rhubarb with a sprinkle of sugar, and it is a wonderful topping. Think about adding it to soup, or pickling it.

The rhubarb window is short. Late in it's season the stalks start taking on the toxicity of the leaves, so it isn't safe to eat. So learn to enjoy it now. At the very least, make a pie.

Tell me, readers, are you a rhubarb fan? How else do you eat it? I'll pick two comments on May 22 to each win a copy of any of my books.