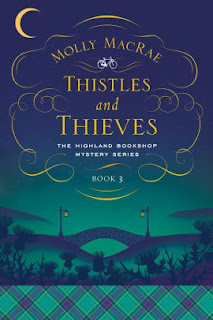 By Janet Marsh, from the Highland Bookshop mysteries by Molly MacRae

Christine came up with a plan to lull Constable Norman Hobbs into giving us information about the recent murders in Inversgail—invite him for a friendly game of Scrabble and refreshments. But Christine didn't know that Norman is a Scrabble shark.

We each chose one tile to start. Norman won the draw with a C.

“C for constable,” said Norman. “Are we playing in Scots, Gaelic, and English?”

After we chose the rest of our tiles, Norman studied his, and then laid them on the board one by one. “DUILICH. That’s seventeen for the word—with the H receiving double points—and the whole word doubled for the opening hand, plus the fifty point bonus for using all seven tiles. Put me down for eighty-four points, please.” 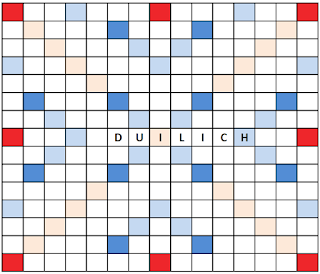 “Sorry.” Norman drew seven more tiles, arranged them on his rack, and looked up to see us all looking at him, waiting. “Ah, I see the problem,” he said. “Duilich. Sorry. Duilich is Gaelic for sorry.”

I thought he looked unusually pleased with himself. Ab-norman-ly pleased.

“Nothing,” I said. “Duilich. Hm. I don’t see much I can do, and I can only use three tiles, but there.” I arranged them using Norman’s D. “DAZE. The Z gets triple points for a total of thirty-four. Not too shabby.” 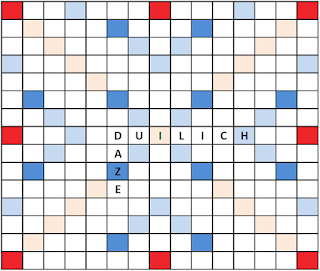 “We’re going to give you a run for your money, Norman,” Tallie said. She put out four letters and spelled ‘QUICK using the second I in DUILICH. “Triple letters for the Q and the K. Fifty total.” 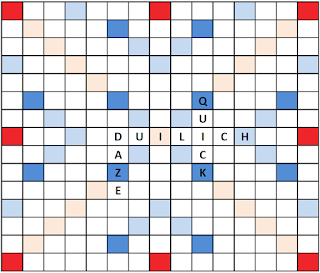 Christine’s mouth grew small. “Lousy luck and a lousier draw,” she muttered. “I haven’t anything useful and I find games that hinge on this kind of luck irritating.” She blew out a breath. “Simply awful.” She tossed two tiles on the board and jabbed them into place to the left of the E in DAZE. “‘SEE’ for a whopping four points. The S is on a double letter square.” 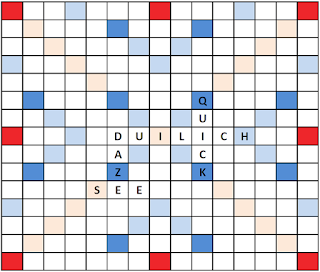 “You’ve shorted yourself,” Norman said. “That’s a double word square, not a double letter, so you have a whopping six points rather than a whopping four.” For his turn, he laid tiles working down from the first I in DUILICH. “IARRAIDH,” he said. “That’s thirteen points for the word—the second A earning double points—and the word tripled to make thirty-nine points, plus the fifty point bonus for using all seven of the tiles. Add on four for building off of Christine’s ‘SEE’ to make ‘SEER.’ Put me down for ninety-three points, please. Oh, and iarraidh means asking for, seeking, searching. Enquiry.” 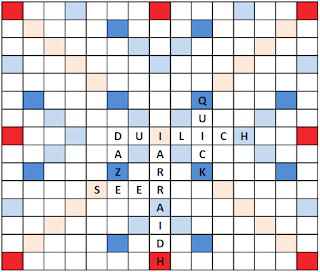 “You know more Gaelic than you let on,” Christine said.

“A word or phrase here and there and nothing really practical,” Norman said. “It’s not the same as knowing the language. Only enough to be dangerous.”

Sadly, we weren’t able to finish the game. I won’t tell you why, because then I’d have to issue a spoiler alert. Before he left, though, Norman looked at the game board and his rack of tiles one more time. He quickly added all seven tiles to the grid, sighed, and left. Tallie took out her phone. 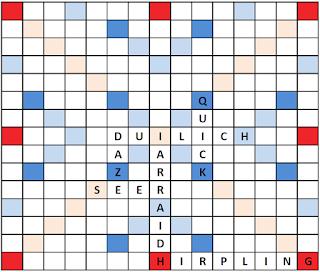 “What are you doing?” Christine asked.

“Taking a picture of the board for Norman,” Tallie said. “I don’t know what HIRPLING means, but he just scored another triple word score and another fifty point bonus. Ninety-two total.”

“Limping,” Christine said. “It means limping, and it’s what he’ll be doing if we ever play this game with him again.”

What board games do you like playing with friends? Are there games you refuse to play again? 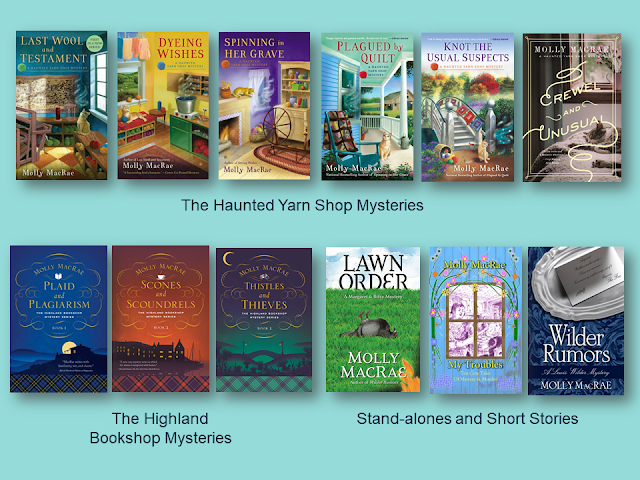