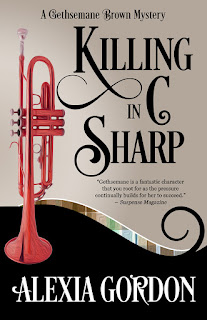 I’m Inspector Bill Sutton, with the Dunmullach Garda Homicide Unit. I’m fifty-eight, I’m married, I have three children, and I’m an ex-smoker. Gethsemane Brown has me reconsidering that last bit. The homicide rate skyrocketed after she arrived in Dunmullach. I’ve never been as busy as I have over the past year. She’s a jinx or something. She’s also a pain in me ar— My wife says I shouldn’t swear. Gethsemane Brown aggravates me near to death. I half-suspect she’s committing these murders herself. ‘Cept, she’s not. Every time I’m convinced I’ve got enough evidence to prove she or one of her friends is responsible for raising the village’s body count, she proves me wrong by uncovering the real killer.

But, here’s a secret. As aggravated as she is, I admire Dr. Brown. She’s smart. (I’ve got a thing for smart women. I married a nuclear chemist.) She’s as brave and as loyal to her friends as she is intelligent. She’s fearless and won’t take no for an answer. Even when that no is from me. Don’t tell her I admire her, though. Tell her to keep her nose out of Garda business. She’s got enough to manage between composing music and wrangling that rowdy bunch of boys in the school orchestra. I know what boys are like. I used to be one and I’ve got two of me own. Why d’ya think it took me so long to quit smoking? Thank heaven, my third’s a girl.

My wife says I need to replace the cigarettes with new ways to relax. I started watching Perry Mason re-runs but then she said I needed to find some way to relax that got me outdoors. I suspect she meant got me out from underfoot. I’m open to suggestions. I’ll try just about anything, as long as it doesn’t mix me up with Gethsemane Brown or murder. Because investigating murder is anything but relaxing.

How do you relax? Let me know in the comments.