Summer Solstice and a Solar Eclipse, Oh My!

By Delia Greenway
from the Garden Squad series by Julia Henry 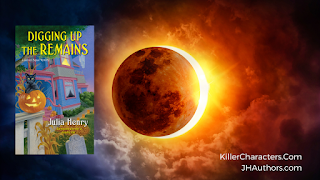 Today is the first day of summer. And there's a solar eclipse. And tomorrow is a new moon.
Lilly doesn't pay as much attention to all of this as I do, but she does let me put sundials in the garden. And of course she pays attention to the seasons.
I really enjoy exploring astrology, and understanding the stars and the phases of the moon. For many years, the moon and the stars were so important to folks as they planted, expected the yearly floods, and tried to understand the world. As we've learned more, we've gotten away from that base understanding, but sometimes I wonder at what cost? The paying attention, the quiet, the expectation--they're all part of my process.
I'm doing some work in Windward, Lilly's house, and reading some of the diaries that the captain who built the house wrote. He talks about navigating by the stars, and how even on dry land he looked up when he was thinking about his next steps. I found his old telescope, and I've been out in the garden, looking up, trying to learn what he know.
Eclipses, new moons and a new season. A wonderful time to reflect, and to think about what's next.
Happy summer, friends.

Julia Henry writes the Garden Squad mysteries. The third in the series, Digging Up the Remains, will be released in August.
Submitted by J.A. Hennrikus